Why My Administration Focused On Education – Jonathan

Dr. Jonathan also said that to liberate people from mental slavery, education must be the top priority of every government.

The former president stated this on Saturday in Kaiama during a grand reception in honour of the Bayelsa State Governor, Senator Douye Diri, by the people of his Kolokuma/Opokuma Local Government Area.

The Jonathan administration between 2011 and 2015 has the record of establishing 13 federal universities across Nigeria and no fewer than 140 schools for the almajirai in the northern states.

His words: “Education is key to development. If you read the history of Singapore, you will see that Lee Kuan Yew that transformed his country from Third World to First World focused on education.

“When you liberate the mind of the people, they will be so enlightened and be able to do the right thing. So, Governor Diri, I assure you that we will work with you to see how to improve the quality of education in the state.

“Bayelsa is relatively young being one of the states created by the late Gen. Sani Abacha in 1996. But a lot of changes has taken place and we believe that Diri would continue to add more.

“Before Bayelsa was created, there was no major tertiary institution in the state. But today we have four universities and other educational infrastructure.”

While commending the governor’s performance in his first year in office, Jonathan restated his call on politicians to put aside hatred and embrace peace for the overall good of the people and development of the state.

Responding to the honour by his kinsmen, Governor Diri thanked them for coming out en masse to receive him.

He described Kolokuma/Opokuma Local Government Area as the epicentre of the struggle of the Ijaw people and of justice and equity in Nigeria.

He recalled the bitter experience of the Odi massacre when in the name of searching for criminals, people were killed and houses burnt and destroyed by the military.

Diri thanked Jonathan for releasing funds for the rebuilding of Odi while in office as president.

He also recalled the prominent roles of Kolokuma-Opokuma sons like the late Isaac Boro and Captain Samuel Owonaro in the Ijaw and Niger Delta struggle as well as during the Kaiama Declaration in December 1998 when the acting Paramount Ruler of Kaiama, Chief Sergeant Ofoniama, was murdered in cold blood also by the military.

He then announced appointment for a daughter of the slain chief, Gesi Ofoniama.

The governor called on the people to realise that the price of the struggle for the emancipation of the Ijaw man and for justice and equity in Nigeria was not in vain as God has divinely produced one of their sons as governor of the state.

He called for their support as well as that of other local government areas in the state.

His words: “For us, Kolokuma-Opokuma has been an epicentre of the struggle of the Ijaws for justice and equity in Nigeria, which suffices to say began in this area.

“I recall the role of Major Isaac Boro of blessed memory in the Twelve Day Revolution. We just laid to rest the last man standing, Captain Samuel Owonaro, in November last year.

“I recall also the Odi massacre when people were killed in the name of looking for common criminals. Our houses were burnt and destroyed. Thank you Your Excellency for commencing the rebuilding of Odi when you were in office.

“Again in Kolokuma/Opokuma was the Kaiama Declaration and one of those who was prominent in that struggle, T.K Ogoriba, is here with us. Houses were destroyed, people were massacred and I recall that the acting Paramount Ruler of Kaiama, Chief (Sergeant) Ofoniama was murdered in cold blood. May I take the opportunity to announce an appointment for one of his surviving daughters, Gesi Ofoniama.

“Kolokuma/Opokuma has paid the price for the struggle for emancipation of the Ijaw man, for the struggle for justice and equity in Nigeria. Today, God has deemed it necessary and timely to bring one of yours as governor of Bayelsa State, which you have been looking for from the old Rivers State for about 40 years.“

Senator Diri expressed appreciation to Dr Jonathan for exhibiting exemplary leadership and for supporting his administration.

He also thanked the immediate past governor of the state, Senator Seriake Dickson, for being instrumental to his being governor.

In a goodwill message, the Deputy Governor, Senator Lawrence Ewhrudjakpo, pledged his unwavering support to the governor and for the administration to succeed in its developmental agenda.

Earlier in his address, chairman of the occasion, Mr. Gesi Asamaowei, called on all stakeholders to lend quality support to the governor from their wealth of experience. 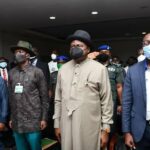 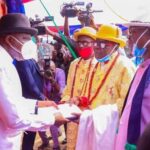 Next:
GOV. DIRI CALLS FOR UNITY IN KOLOKUMA/OPOKUMA