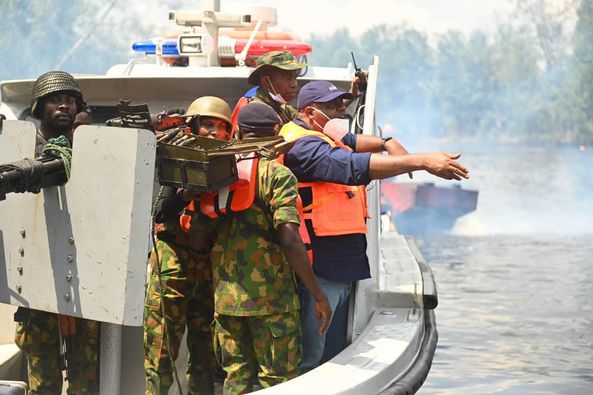 Nothing Has Changed After My Visit One Week Ago- Gov. Diri

After one week when His Excellency, Senator Douye Diri, Governor of Bayelsa State led a powerful team to visit the site of the oil spill at the Santa Barbara river in Nembe Local Government Area, the oil spill has continued.

A team of journalists who visited the spill site on Tuesday in company of the Commissioner for Information, Orientation and Strategy, Hon. Ayibaina Duba and a member of the Technical Committee on the Oil Spill, Mr. Iniuro Wills, were shocked that 35 days after the spill was first reported, the company is yet to stop it.

The stretch of the flowing river, the flora and fauna as well as the livelihood of the people have been heavily affected by the spill.

Although, a representative of the private company engaged to stop the spill from the well head, had said they would achieve the task within the next 48-hours, the Commissioner for Information merely observed that they be given the benefit of the doubt. Governor Diri, who spoke to the journalists after their visit to the site, said it was a disturbing attempt to politicize the oil spill that has affected thousands of lives.

“Beyond the call for sanctions, what my administration is going to do is first of all, to identify experts on this, we don’t want to work in some assumptions, we want to work on facts, so, we are trying to gather experts, environmental experts, oil pollution experts, legal experts to assess, evaluate and then advise government on the appropriate steps to take.

First and foremost, we want this unabated gushing of Crude Oil and Gas to the environment stopped. It has been on for over a month, so the very first day I visited there, and even before I visited there, we had made press statements and now, we are still continuing to call on the authorities which includes the Oil Company itself, Aiteo that is responsible to that well of OML 29 and the Federal Government, to please save our environment and stop the unwanted lives that will be lost as a result of this Spill. So, our call first, is for them to stop this Spill.

Following the stoppage, is to ensure the environment remediation and that may not be only for only Nembe. In fact, the whole of Bayelsa, there must be an action plan to ensure the whole environment is also part and parcel of the clean up. There shall be a clean up, just as the Ogoni clean up even though it is yet to commence”, Gov. Diri stated. 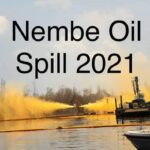 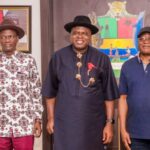