Bayelsa State Governor, Senator Douye Diri, says only justice and equity for every section of Nigeria would bring to an end the clamour for self-determination in the country.

Senator Diri stated this on Friday when members of the Nigeria Labour Congress (NLC) led by its president, Comrade Ayuba Wabba, paid him a courtesy visit in Government House, Yenagoa.

A statement by his Chief Press Secretary, Mr Daniel Alabrah, said the governor expressed concern over the level of insecurity in some parts of the country, describing it as alarming.

His words: “The current spate of insecurity in the country is alarming. And, of course, Nigeria has no reason to disintegrate.

“What we need is equity and justice. As long as we practice injustice, inequitable distribution of resources and if we create second class citizens, then there would be that call for disintegration of the country.”

Senator Diri noted that his administration had been labour-friendly from inception and it prioritised the welfare of workers in the state, particularly in the area of prompt payment of salaries and gratuities for pensioners.

According to him, despite the COVID-19 pandemic coupled with the challege of dwindling revenues from the federation account, payment of salaries was made a frontline charge.

He said his government had achieved a lot working with the state labour union and assured that its sectetariat would be built and the new minimum wage implemented for workers in the local government councils as soon as it was practicable.

The governor  commended Comrade Wabba for his purposeful leadership of the NLC and for ensuring industrial harmony between government and the workforce.

He also commiserated with the National President of the Medical and Health Workers Union, Comrade Josiah Biobelemoye, over the death of his mother.

In his remarks, Comrade Wabba called for unity among Nigerians to collectively tackle the issue of insecurity in the country.

The NLC president praised Senator Diri for his workers friendly posture and urged him not to relent.

He said they were in the state to condole with one of their members, Comrade Biobelemoye, on the demise of his mother.

Highpoint of the visit was the presentation of an Outstanding Leadership Award to Senator Diri in recognition of his commitment to the welfare of health workers in the state and overall development of the state by the Joint Health Sector Unions and Assembly of Healthcare Professional Associations.

The Deputy  Governor, Senator Lawrence Ewhrudjakpo, was also honoured by the NLC in recognition of his contributions to the development of labour movement in Nigeria. 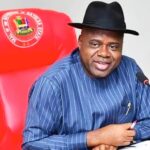 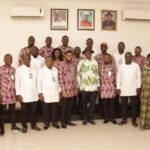