Bayelsa Deputy Governor, Senator Lawrence Ewhrudjakpo has expressed worry over the increasing rate of idleness and dependency syndrome displayed by some of the new generational youths in Ijawland.

Senator Ewhrudjakpo voiced his concern while granting audience to the executive members of BEKNOSSY, a socio-political group in Yenagoa.

In a statement by his Senior Special Assistant on Media, Mr Doubara Atasi, the Deputy Governor described the growing trend as a simmering time bomb that would explode to worsen the insecurity and economic backwardness in the Ijaw nation.

Senator Ewhrudjakpo who also described the average Ijaw man as hardworking, courageous and independent, wondered what is responsible for the indolence and begging attitude exhibited by the new generation of youths. According to him, it is sinful for an adult person to remain idle and expect other people to take responsibility for his or her own life.

He said it was delusional for anyone to think that government alone would be able to meet everybody’s need in society, stressing that the primary duty of government is to secure lives and property.

While thanking BEKNOSSY for their support during and after the elections, Senator Ewhrudjakpo, however, urged the group not to restrict itself to political mobilization for the present administration.

He called on BEKNOSSY, civil society organizations and religious groups to complement the Governor Douye Diri-led government to sensitize the youth on the importance of acquiring skills to enable them earn a decent living.

His words: “Most of our youths these days have carved out an unenviable niche or identity for themselves. So there is this impression that Bayelsa youths are lazy and unwilling to work. But they want to get rich quickly.”

The Ijaw man is a very proud, hardworking, honourable and courageous man. Our forebears were not known for laziness and idleness. So, if our forebears did not do that, at what point did we detach from being hardworking?”As far as I’m concerned, the behaviour of our youths, who have taken to laziness as a trade and business is more dangerous than a time bomb that will cause more insecurity and poverty in the future.

“I say so because a lazy man (all things being equal) will beget a lazy son, who will also beget lazy children. And so, you will have a lineage of people who will not be doing anything other than saying ‘I’m loyal’.

“So, if this generation passes and the idle group of youths takes over, what do you think will happen to our state and Ijaw nation? That is why, apart from politics, you have to join us to do the duty called behaviour change communication.”

Earlier, the Director General of BEKNOSSY, Pastor Sambo Sataria, thanked God for the emergence and subsequent court victories of the Prosperity Government.

He explained that the group’s name, BEKNOSSY, was coined from the first letters of the names of the eight local government areas, adding that its mission is to galvanize support for the Peoples Democratic Party and the Prosperity administration.

Pastor Sambo called on Bayelsans to support the Administration and solicited government’s assistance in the area of logistics to enable the group inaugurate its new executives on the 27th of this month. 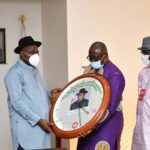