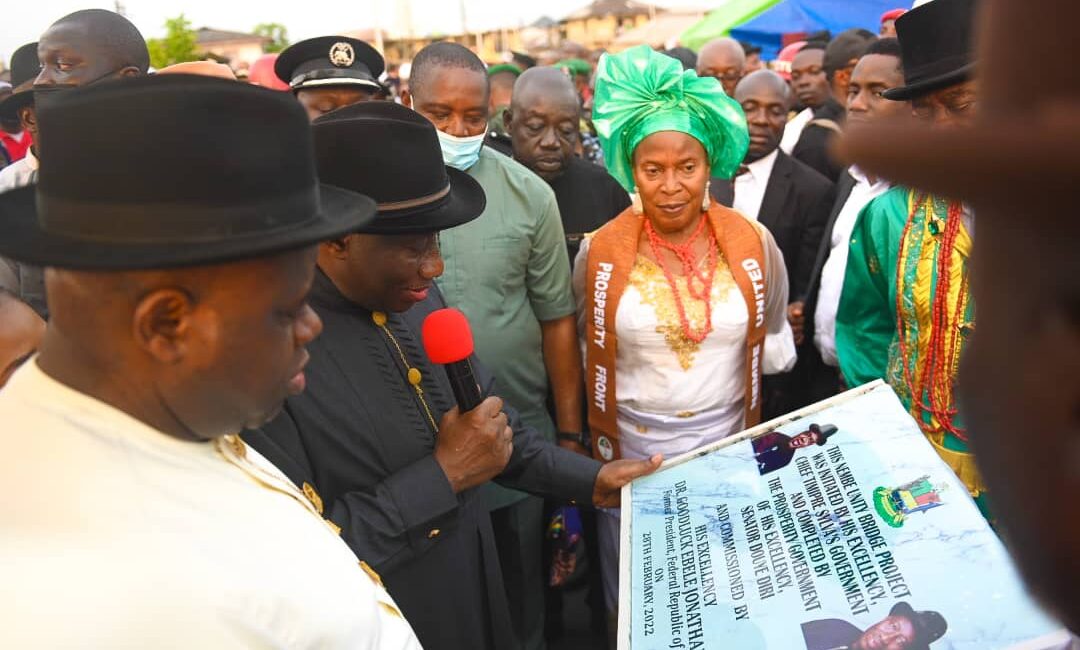 There was excitement in the Nembe communities of Ogbolomabiri and Bassambiri as well as in Elebele in Nembe and Ogbia local government areas respectively of Bayelsa State on Monday as former President Goodluck Jonathan inaugurated two historic bridges in the communities.

The people of these communities, who trooped out in their numbers, sang the praises of Governor Douye Diri for completing the Nembe Unity Bridge linking Ogbolomabiri to Bassambiri and for constructing the Elebele Bridge, which is also a gateway to Nembe.

While inaugurating the bridge in Nembe, Dr. Jonathan applauded Senator Diri for completing the project, which he noted would help to consolidate the peace and unity between both communities.

The former president described the bridge as symbolic and urged the people of Nembe to learn to resolve their differences amicably, especially during elections rather than play politics of brigandage and violence.

His words: “You have done well to complete this bridge project. I had to come and identify with this unique ceremony. Today should mark the end of any inter-communal conflict.

“The importance of this bridge cannot be over-emphasised. From what I have seen, this bridge is expensive, well-built and solid. And I hope it will solidify the unity between the people of the two communities.

“Politics should be a platform to bring development to our people and not to kill and chase them away from their communities. With the commissioning of this bridge, we pray that that brand of politics would also come to an end.”

Governor Diri said the Nembe bridge had been on the drawing board since the days of Eastern Nigeria but that a former governor, who is now the Minister of State for Petroleum, Chief Timipre Sylva, started some construction work but the project was left till his administration took it over and completed it.

Describing the bridge as historic, the governor said the project was one that would heal wounds and engender peace and unity among the people of Nembe.

“My administration felt this is one historic and significant infrastructure that would help heal wounds. It is not only a physical bridge but a human bridge, especially between the brothers of Ogblomabiri and Bassambiri. Wherever there is war, development suffers and we lose not only infrastructure but human lives.”

Earlier, the former president and the governor visited the Amanyanabo of Nembe, Mingi XII, King Edmund Daukoru, in Ogbolomabiri and Amanyanabo of Opu-Nembe, Ogbodo VIII, King Biobelemoye Josiah, in Bassambiri.

King Daukoru said the Nembe bridge was symbolic, noting that what it represented far outweighed the physical length of the project as there had been
age-old differences between the two communities.

He commended Diri for completing projects that he started as well as those inherited from his predecessors, describing the gesture as a mark of true leadership.

He also appealed for the construction of the Nembe-Brass road among others.

King Josiah, on his part, commended the governor for the bridge project, noting that prior to its construction, there had been temporary bridges.

He solicited government’s support for the provision of electricity and pipe-borne water.

Also, speaking to journalists, the immediate past deputy governor of the state, Rear Admiral Gboribiogha John Jonah (rtd), who hails from Nembe, gave thumbs up to the Diri administration for constructing the unity bridge, saying it was the first time since 1971 that a proper bridge had been built to connect both communities.

Rear Admiral Jonah, who called on  youths from both communities to sustain the existing bond of brotherhood, expressed the optimism that the project would foster more peace, unity and development.

“There had always been the desire that a bridge connects both communities. The first attempt to have a bridge was in 1971 during the administration of Alfred Diette-Spiff (in Rivers State). Since then, two bridges have been constructed – one wooden and the other steel.

“This is the first time we are getting a bridge that we need. There had been issues between the two communities. That is why it is called Unity Bridge to unite both sides.

“For Governor Diri to take this as one of the priority projects on assuming office, it is commendable. We were there for a very long time but we could not summon the courage to do it. He did what we could not do for eight years.”

In his speech, the Commissioner for Works and Infrastructure, Mr. Moses Teibowei, said the bridge was started by Chief Sylva in 2009 but was abandoned until Senator Diri awarded it in 2021 and completed it within one year.

While inaugurating the Elebele Bridge, Dr Jonathan said its construction by the Diri administration was a message to the multinational oil companies that Niger Deltans states were capable of helping themselves.

According to him, Elebele had been host to oil giants, Shell, for decades but it failed to build a solid bridge for the community.

He noted that its successful construction was proof that it was possible to build a solid bridge instead of the temporary ones that Shell previously constructedl.

He applauded the governor for embarking on the project, which he said is of  economic importance not only to the Ogbia people but also the people of Nembe.

Jonathan said: “Elebele has been producing oil for years and Shell has been building temporary bridges every two years. Today, you have saved us. You have not only saved the people of Elebele but also the Ogbia people.

“You have also in a way communicated to the IOCs that we can help ourselves. There is no reason Shell could not build a bridge here but God wanted you to take the glory.

“Today is unique because the bridge is quite important not only to the Elebele people. Elebele serves like an interchange for people going from Ogbia to Nembe. That is why this bridge is so important to all of us.”

Governor Diri stated that he embarked on the project due to its political, economic and social importance to the people of Ogbia and Nembe local government areas.

The Bayelsa helmsman appreciated the community for cooperating with the construction company and the government to ensure the successful completion of the bridge.

He advised youths in other communities to emulate the Elebele youths, who saw the bridge as their own and did not embark on any protest or kidnap workers while the project lasted.

He also thanked the contractors, Paache Construction Limited, for a job well done.

Earlier, chairman of Ogbia Local Government Area, Ebiyon Turner, appreciated the governor for  the project and expressed the support of the Ogbia people for his administration.

In his speech, the Commissioner for Works and Infrastructure, Moses Teibowei, said the bridge, which collapsed in 2019, was built within 12 months. 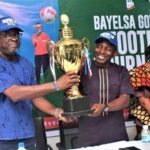 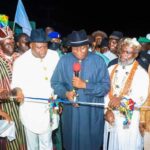