Bayelsa State Governor, Senator Douye Diri, has said he would support any initiative towards enhancing the capacity of legal practitioners in the state.

Governor Diri made the pledge when President of the Nigeria Bar Association (NBA), Mr. Olumide Akpata, paid a courtesy visit to Government House, Yenagoa, on Tuesday.

He applauded the NBA President for the initiative to go round branches of the association nationwide to know their challenges.

While commending Akpata’s vision for capacity building for lawyers, the governor said a basic problem of the judiciary in the state was training and retraining jand pledged his support for any training initiative.

In response to a request that courts be also provided in rural areas apart from the state capital for easy access to justice, Diri said the challenge was not in building the facilities but about ensuring the security of the judges.

His words: “I have never heard the NBA President going round the branches in Nigeria. This is the first of its kind and we need to appreciate you for it. The thought of getting in touch with your branches to know their challenges and proffer solutions is quite commendable. That is what makes you a leader.

“Let me also commend you on your vision for capacity building of the lawyers. As a government, I want to pledge our support if you are doing that in our state. People have to be abreast of modern developments and changes in various professions. It is worthy of note that you are treading in the right direction to ensure that lawyers undergo training and retraining while they do their job.”

Earlier, the NBA President commended Governor Diri for the cordial relationship between his administration and the judiciary.

Barr. Akpata noted that the feedback from lawyers in the state indicated that they were being adequately taken care of by the government, and pledged the support of the bar for the administration.

He revealed that his visit to the state was to get in touch with members in order to know their challenges with a view to proffering solutions.

He stressed the need for government lawyers to undergo training and retraining to be abreast of current trends in the profession.

He said: “I am happy to report that the feedback I received is that the judiciary in Bayelsa is doing well. The Chief Judge told me that things are going well between you and the Judiciary. I thank you for that.

“The feedback I get from lawyers in Bayelsa State is that they are well taken care of. Your Excellency, do not be weary in well doing.” 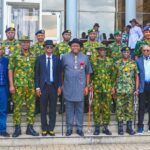 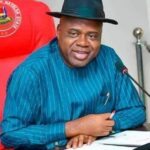 Next:
Governor Douye Diri is a grateful, unifying man of peace