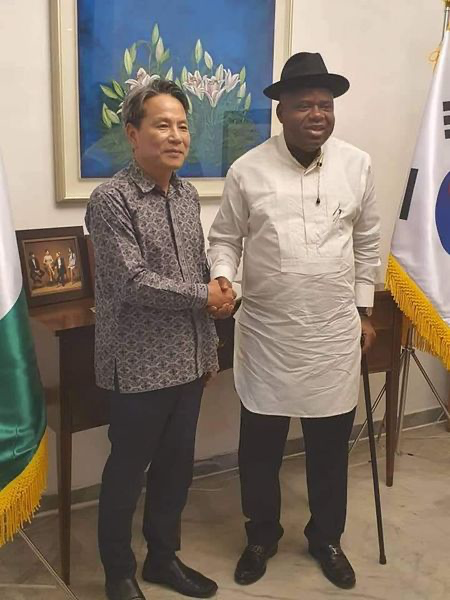 Bayelsa State Governor, Senator Douye Diri, has sought the partnership and support of South Korea in areas of agricultural, maritime and infrastructure development of the state.At a meeting with the South Korean Ambassador to Nigeria, Kim Young-Chae, in Abuja on Friday, Governor Diri said given its maritime similarity with Bayelsa, the state also needed the South Korean expertise and partnership in developing deep-sea fishing, aquaculture and rice cultivation.

His Chief Press Secretary, Mr. Daniel Alabrah, in a statement, quoted the governor as saying that the state was equally interested in partnership in education, science and technology as well as in oil and gas.

He said his administration pays serious attention to the issue of security as top priority and has conscientiously worked with the security agencies to make it and its maritime domain safer than before.

His words: “The purpose of this meeting is to explore areas of economic partnership and seek the expertise of South Korea in developing our state and its economy.

“Bayelsa has huge potential in agriculture and marine resources. We seek foreign investment in aquaculture and deep-sea fishing. Our terrain is good for aquaculture to thrive as well as rice cultivation and production with the large expanse of land already in Peremabiri and Sampou.

“We are trying to revive the culture of farming in our state. The government is interested in commercial farming as against the culture of subsistence farming that a lot of our people engage in.

“The South Korean expertise is also required in the production of plastics, in science and technology and the oil and gas sector.

“Our administration is taking deliberate steps to open up the state. This can be done through massive road construction and development of infrastructure, including how to control the perennial flooding in our state. We seek your partnership and expertise too in this area.”

Governor Diri noted that such partnership would help in empowering youths of the state that would be given training in order to check youth restiveness and militancy.

He thanked the ambassador for the warm reception and assured him that he would constitute a team on the part of his government to interface with him and his team.

In his remarks, the South Korean Ambassador, Kim Young-Chae, appreciated the Bayelsa governor for the visit.

Amb. Young-Chae said South Korea nationals work with Daewoo, which is located in Bayelsa, and other firms in different states of the Niger Delta.

The envoy, who invited a delegation from Bayelsa to the 2021 Korea oil and gas summit in November, said the state was among six states in Nigeria to benefit from the South Korea government-funded scholarship scheme. 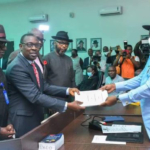 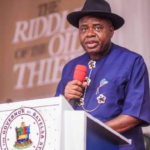