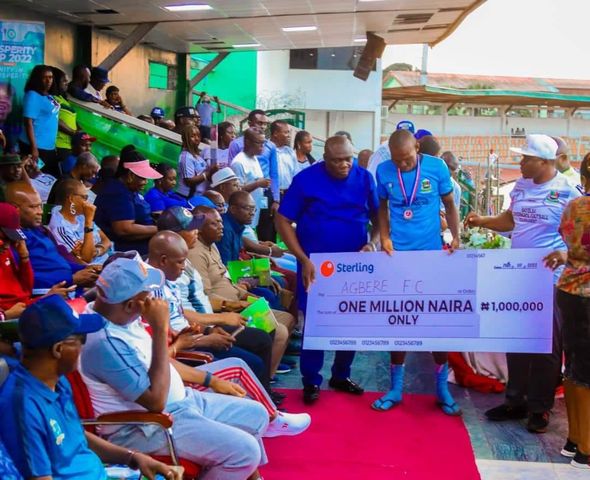 In the finals played at the main bowl of the Samson Siasia Sports Complex, Ovom, this evening, EGM came from a goal down to beat Odioma FC of Brass 2-1 in the game watched by Governor Douye Diri, his wife, Dr. Gloria, Deputy Governor, Lawrence Ewhrudjakpo and other top government functionaries.

EGM F.C of Yenagoa, Onyema Ben and Stephen Harry, while Ayibakepreye Kumolayefa scored the only goal for Odioma F.C of Brass.

206 community-based teams participated in the tournament.

Agbere FC of Sagbama LGA had earlier in the day won the 3rd placed after a 3-2 win over Ayama FC of Ogbia LGA.

In a speech, Governor Diri, who commended all the participating teams said he was happy that the competition would help discover talents and foster unity among the people.

He also commended the organisers particularly, the Director-General of the Governor’s Cup, Mr. Ono Kelvin Akpe, for a great show and that Bayelsa State is gradually becoming the centre of sports development in Nigeria.

“It gives me great pleasure today to be here physically to see the very satisfying and technical performance in this finals. This can be compared to any finals in the world, because, the standard of play is very high, and I can tell you that football is here in Bayelsa State.

I congratulate you all of you who participated in this tournament, and as you know that sports, and in particular, football, is a unifier. This tournament has brought unity and peace to our State”,Gov. Diri stated.