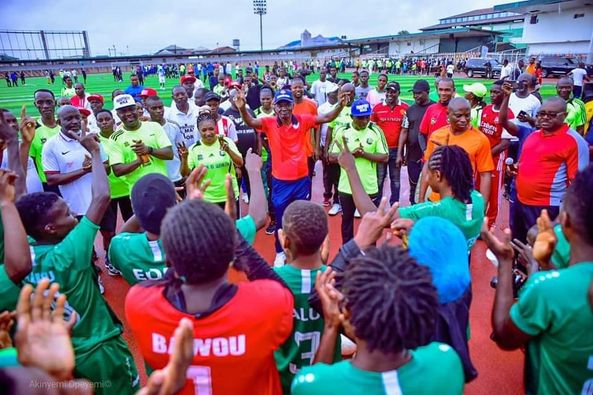 As part of its motivation strategies, the Bayelsa State Government has announced an increase in the cash rewards for its female club side, the Bayelsa Queen’s, ahead of the Nigeria Women’s Football League Super 6 Championship.

The government disclosed on Thursday that it has increased the one million naira cash gift for every match won to 1.5 million naira, while goal scorers will coast home with N200,000 for each goal as against the previous N150,000.

The state Deputy Governor, Senator Lawrence Ewhrudjakpo, made the announcement while addressing the Management and players of the team at the Samson Siasia Sports Complex, Yenagoa at the end of the weekly Prosperity Walk.

This is coming ahead of preparations for the Nigerian Women’s Football League Super 6 championship, scheduled to begin on the 16th- 22nd of this month in Benin, Edo State.

A statement by the Senior Special Assistant on Media to the Deputy Governor, Mr. Doubara Atasi, explained that first assist for every goal scored will get a hundred and fifty thousand naira, while one hundred thousand naira each is earmarked for second and third assists.

According to the statement, the Office of the Deputy Governor also made a donation of two million naira to the Queens for topping the just concluded Female Professional League table.

“Meanwhile, for topping the league, you will get two million naira today. You have defeated most of the major female teams, like Rivers Queens and Delta Queens, so defeating them again this time around won’t be so difficult”

Also lending her voice, the Wife of the State Governor, Dr Gloria Diri, thanked the team for always bringing laurels to the state and charged them to repeat the feat once more as they do battle at the Super Six Championship in Edo State.

Meanwhile, Governor Douye Diri has given the sports Commissioner, Dr Daniel Igali, a pat on the back over his recent award as Sports Man of the Year by Sun Newspapers.

Governor Diri, who gave the commendation while addressing participants of the fifth edition of the Prosperity Walk, described Dr Igali as a great champion who has not only carved a niche for himself but has always made the state proud in the world of sports.Represented by his Deputy, Senator Lawrence Ewhrudjakpo, the Governor thanked all Bayelsans who turned out for the exercise, which he described as useful and productive.

The governor who commended the sports ministry for introducing new initiatives such as raffle draws to spice up the exercise, observed that there has been some improvement in the fitness of all participants since the walkout commenced.

He noted that the initiative was to encourage everyone to make good use of the weekly exercise to prevent unnecessary illnesses.

Highpoint of the 5th edition of the Prosperity Walk was the presentation of ten thousand naira each to five lucky winners of the draws, introduced for the first time by the state Commissioner for Youth and Sports Development. 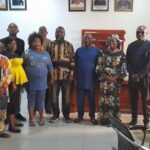 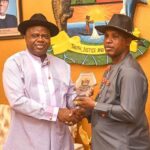