GOVT. SUES FOR UNITY AMONG JOURNALISTS

…reiterates Govt’s. Commitment to the Development of the State.

The Commissioner for Information Orientation and Strategy, Hon, Ayiba Duba calls for teamwork among the various media chapels of the Nigerian Union of Journalist (NUJ) in Bayelsa State.

Hon. Duba made the call when the newly elected Executive of the United Correspondents Chapel of the Nigerian Union of Journalist paid him a courtesy visit in his office in yenagoa.

The Commissioner noted that for effective dissemination of government policies and programmes, it is imperative for journalists to exhibit professionalism and calls for the unity of all segments of the NUJ chapels in the State.

Hon. Duba who assured journalists of government support, reiterated that the prosperity government of Senator Douyi Diri is responsive to the needs of Bayelsans and residents of the State, adding that it is one of the reasons government is embarking on the construction of the Nembe/Brass Road to link all the LGAs of the State by road.

He noted that the Nembe/Brass 42 kilometres road has been awarded to Setraco at the cost of N54 billion, adding that the first phase of 21 kilometres which consist of 10 bridges will commence this year.

Earlier, the Chairman of the United Correspondents Chapel of NUJ, Mr. Akam James commended government for its media friendly disposition and sponsorship of some categories in the just concluded 2022 edition of the Bayelsa Media Award (BMA), which he noted would further increase media productivity in the state.

He thanked government for according them the opportunity to operate, noting that a better synergy would promote a wider coverage of government activities. 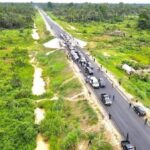