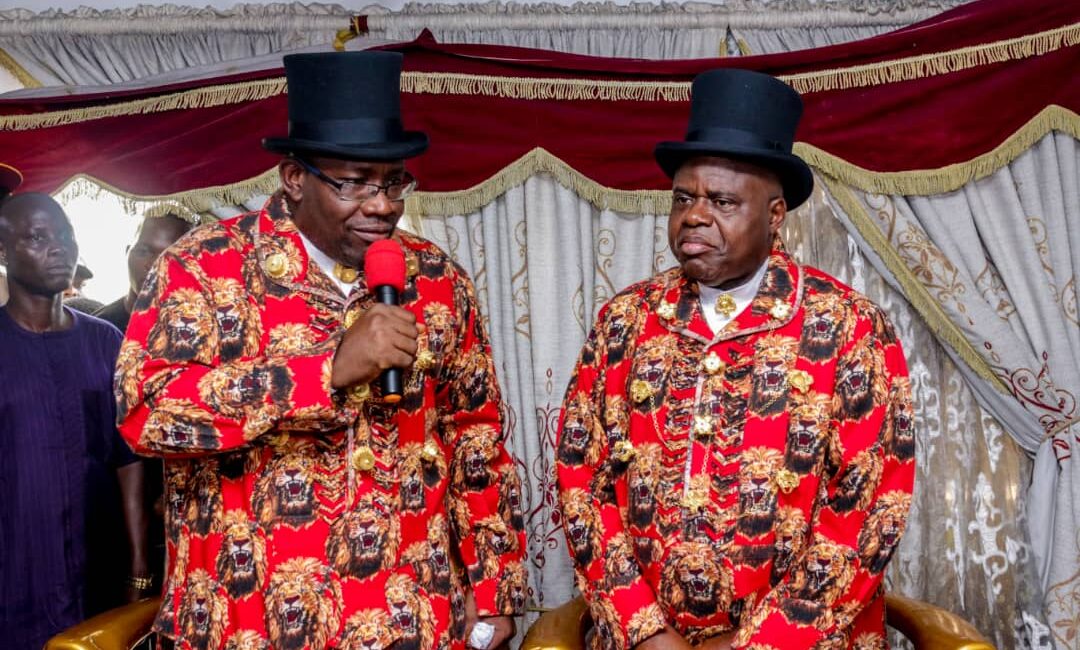 The Ataba Kingdom in Andoni Local Government Area of Rivers State has conferred on Bayelsa State Governor, Senator Douye Diri, the title of Oro-Ata 1, which means the “one who does good to his people.”

Also honoured was Governor Diri’s predecessor and Senator representing Bayelsa West, Chief Seriake Dickson, as the Utoron 1 of Ataba, meaning  the “light of the community.”

Two roads in the kingdom were also named after the illustrious sons of the Ijaw nation.

The Okaan-Ama Of Ataba Kingdom, King Benson Mgbowaji Egwenre, Oruk XVII, made the pronouncement at the weekend during the duo’s courtesy visit to his palace.

King Egwenre said the Ataba Divisional Council of Chiefs, on behalf of the kingdom, honoured both leaders for showing uncommon love to its indigenes through appointment in their government in Bayelsa State.

Describing their presence in Ataba as historic, the monarch noted that over the years, Bayelsa had demonstrated an unbroken love for his people from the days of the late Chief Diepreye Alamieyeseigha as governor of the state.

He said it takes one with a large heart to consider the whole of the Ijaw Nation as his constituency, noting that Diri has kept the legacies he inherited by appointing their son, Mr. Erasmus Patrick, as Commissioner for Ijaw National Affairs as well as seeing to the emergence of another Ataba son, Deacon Timothy Igbifa, as president of the Ijaw Youth Council.

Responding on behalf of the duo, Senator Dickson thanked the king and people of Ataba for the honour.

He said that the action and intention of promoting Ijaw nationalism made Bayelsa the centerpiece and that he gave it the appellation the Jerusalem of Ijaw nation.

He said the people of Ataba and Andoni believe in the Ijaw cause and have over the years produced sons and daughters that have served and are still serving the Ijaw nation in various capacities.

The immediate past Bayelsa governor also stated that Diri, since assuming office, has continued to promote Ijaw nationalism because he understood the imperative of unity and solidarity of the Ijaw nation, being a product of the Ijaw struggle.

Later, at the funeral of Madam Henrietta Fimie Patrick, mother of Erasmus Patrick, Governor Diri thanked God for the life of the matriarch, who lived for 102 years.

Diri said although the gathering was solemn, there was need to celebrate a life well spent and rejoice with the Patrick family and Ataba people.

He described the late matriarch as the Esther of her time; beautiful not only physically but also in her heart.

His words: “As solemn as today is, it calls for celebration because God gave Mama the grace to live for 102 years. So we are here to join our friend and brother, Erasmus Patrick, the Patrick family and the people of Ataba to celebrate our mother whom God has called home.

“Going through her biography, clearly she was an Esther, a beautiful woman not only physically but also beautiful in her heart. For that reason, everybody calls her the Nma of Ataba.

“Let me on behalf of the government and good people of Bayelsa State extend our condolences to the Patrick family and the people of Ataba Kingdom.”

Highpoint of the event was the unveiling of the Chief Senator Douye Diri, the Oro-Ata 1 of Ataba Kingdom road. 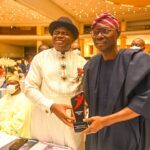 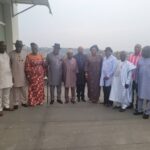