Bayelsa state Commissioner for Information, Orientation and Strategy, Hon. Ayiba Duba has charged movie producers to promote the cultural heritage of the state.

The Commissioner gave the charge during a courtesy call by the Association of Movie Producers (AMP), Bayelsa state chapter, in Yenagoa.

He noted that the State is blessed with rich cultures, languages, artifacts, and biodiversities to be exposed by the movie industry.

Hon. Duba who assured the support of the Ministry, urged the state chapter of AMP to propagate the cultural heritage of the Ijaw man, by telling the Ijaw stories that revolve around truth and resilience, in a bid to change the narrative expressed by those who do not understand the hopes and aspirations of the people.

Earlier, the Chairman, Bayelsa state chapter of AMP, Mr. Opoikumo Jerry Maxwell stated that the association is the main employer of labour in Nollywood.

He noted that the movie industry provides so many opportunities; in acting, directing, script/screen writing, costuming, makeup and more, adding that AMP is set to organize a summit and programme that would meaningfully engage youths in the State. 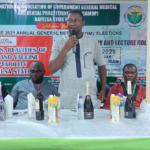 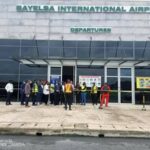