President of the Nigeria Wrestling Federation (NWF), Hon. Daniel Igali, has given kudos to the Bayelsa State Governor, Senator Douye Diri, for his administration’s tremendous support to Nigerian wrestlers.

Hon. Igali gave the commendation when the governor visited the Nigerian wrestling camp in Yenagoa ahead of their departure to Tunisia for the Tokyo Olympic Games African qualifiers.

Igali, who is also Bayelsa State Commissioner for Youth and Sports, expressed gratitude to Senator Diri for his support to the federation since the wrestlers began camping about a month ago.

His words: “On behalf of the NWF, I want to thank Governor Douye Diri for all the support to wrestling. We started camping here over three weeks ago and the governor has been responsible for bringing everybody to camp in Bayelsa.

“Bayelsa is the only state that hosts annual national wrestling championship in the past 10 years in the country. All our athletes from Bayelsa, the South-South and across the country regard Bayelsa as the home of wrestling.”

Igali said the first batch of the athletes would depart the country on Monday, March 29 while the second batch would leave the next day.

He said nine out of the 10 wrestlers going for the Olympic qualifiers are African champions and expressed the hope that they would win their first Olympic medal.

The Sports Commissioner also assured the governor that the Bayelsa team to the National Sports Festival holding in Edo State would make the state proud.

Governor Diri, in his remarks, charged the athletes to be worthy ambassadors of the state and the country and expressed the conviction that they would excel in their various categories.

While commending the NWF and the Nigeria Olympic Committee for their commitment, he urged the contingent to ensure victory for the country.

“The number one sport for Bayelsa is wrestling. Before now, we had wrestling festivals across the communities. Wrestling is part and parcel of the state.

“You are not only athletes but ambassadors of Bayelsa and Nigeria. As you go to Tunis for the qualifiers, compete and conquer and carry the flag of Nigeria high. You will return as those who will represent Nigeria and Africa in the next Olympics.”

Senator Diri, who urged the NWF president to also consider training youths in swimming, noted that Bayelsa has comparative advantage in the sport, which could bring laurels to the country.

The governor charged the state contingent to come tops at the National Sports Festival and also approved more funds to defray all the costs incurred by the NWF at the national team training camp. 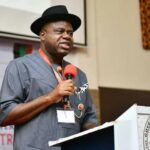 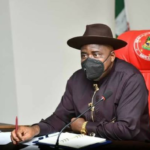