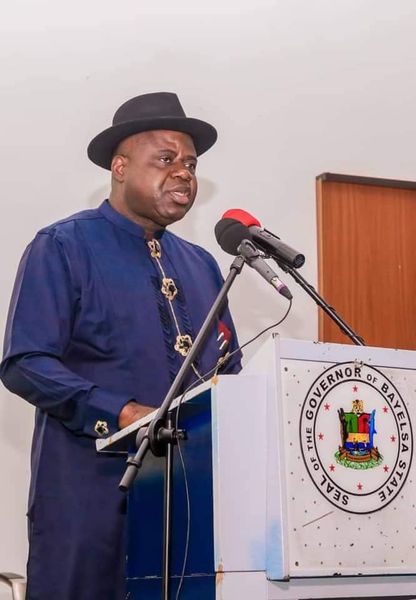 My Administration Committed To Better Bayelsa Despite Challenges

Bayelsa State Governor, Senator Douye Diri, has said despite the challenges of the past year, his administration remained focused on ensuring a prosperous and better state for the people.

Governor Diri, who stated this in a New Year Day broadcast on all Yenagoa-based radio and televisions, also said there were many reasons to be grateful to God despite the difficult times in the country.

A press release issued by his Chief Press Secretary, Mr. Daniel Alabrah, quoted him as saying that a transition such as the closing of one year and the birth of another represented an important milestone to be thankful for God’s love and kindness.

The governor asserted that in spite of the funding challenges of 2021, his administration recorded significant achievements in healthcare, education, agriculture, youth and women empowerment, security, infrastructure development and reconciliation of aggrieved communities among others.

He praised Bayelsa sportsmen and women, who he said justified his government’s investment in sports by winning laurels for the state, particularly, Bayelsa United and Bayelsa Queens that won the men and women version of the AITEO Cup as well as the nine-year-old Deborah Quickpen that won the Under-10 Africa Chess Championship.

In the area of security, the state helmsman recalled that in the outgone year, the state’s special security outfit, Operation Doo Akpo, was rejigged, re-commissioned and kitted with upgraded assets.

While stating that a number of projects will be inaugurated during the second anniversary of the administration in February, Governor Diri assured that it will continue to take the necessary actions to address the challenges of youth unemployment, poverty, inequality and poor health.

He noted that regardless of the undeniable progress made so far, there were still areas to be consolidated upon and called on the people of the state to join hands with the government to take Bayelsa to the promised land.

His words: “In retrospect, in 2021, whereas we had to deal with several challenges, particularly in the area of funding, we can nevertheless applaud ourselves for the strides we made in the course of the year by the grace of God.

“By prudently managing our lean resources we have been able to progress in sundry areas including, but not limited to, healthcare, education, agriculture, youth and women empowerment, security, extensive infrastructure development and reconciliation of aggrieved communities, just to mention a few.

“The vision for a prosperous Bayelsa is evolving and ongoing. I am the first to acknowledge that despite the undeniable progress, there are areas to improve and gains to consolidate upon. This is the time for genuine friends of the state to align with the prosperity vision so that together we can transform challenges to opportunity and prosperity.”

He renewed his call for more responsible exploitation and exploration of oil in the Niger Delta and Bayelsa in in particular, bearing in mind the recent oil spill in Nembe and other parts of the state, which he said has jeopardised the lives and livelihood of the people.

Earlier, during a cross-over interdoniminational service held in his community, Sampou, in Kolokuma/Opokuma Local Government Area, the governor called on politicians in the state to be tolerant and shun divisive politics ahead of next year’s general election.

He said the call became necessary given the destructive brand of politicking of some politicians in the state.

He recalled how he emerged as governor without involving in violent politics or trying to bring anybody down.

He also called on youths of the state to resist being used as tools of violence by politicians during elections while urging them to take advantage of the policies and programmes of the prosperity administration to better themselves.

The state helmsman equally reaffirmed his administration’s determination to continue to create the enabling environment for businesses to thrive and called on private investors to take advantage of the business potential in the state and the prevailing conducive security atmosphere.

Drawing from the book of Isaiah 41 vs 10, Governor Diri urged the people to harbour no fear regarding any difficulty but to put their trust in God, who he said will be there for them.

His words: “I thank the Lord for the peace in Bayelsa State. Our New Year message is simple: Bayelsa fear not.”

He also charged families to uphold ennobling virtues for the society to make good progress.

“The family unit is very important. Let Bayelsa families stand up and those cherished values of our fathers be exhibited. Bayelsa will be a better place when we activate these values.

“We have the best of locations. All we need to do is develop them and tourists will locate them. We cannot leave everything for government. Yes, it is the duty of government to create the enabling environment and that we will continue to do in this new year.

“Bayelsa is the most hospitable state. We welcome you with both arms as long as you are here to do legitimate business.

“Our youths, when they come with drugs and guns, tell them to hand them over to their children.”

Waxing prophetic, the governor recalled how his administration came into office, noting that power belongs to only God.

Dignitaries during the service included member representing Sagbama/Ekeremor Federal Constituency in the House of Representatives, Dr. Fred Agbedi and his Ogbia Federal Constituency counterpart, Fred Obua as well as members of the state executive council and other political appointees. 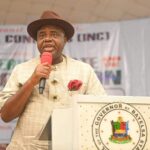 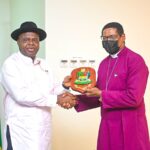