Bayelsa State Governor, Senator Douye Diri, has urged the people of Kolokuma/ Opokuma Local Government Area to eschew politics of bitterness and be united in love.

Governor Diri said rather than divide themselves, they should take advantage of his administration’s economic policy of being self-reliant in agriculture.

The governor gave the admonition on Sunday in his community, Sampou, which hosted the 8th edition of the annual KOLGA Day/ Thanksgiving Service convened by General Overseer of the Royal House of Grace Church, Apostle David Zilly-Aggrey.

His Chief Press Secretary, Mr. Daniel Alabrah, quoted the governor as saying that the KOLGA people should recognise God’s hand in his emergence and seize the opportunity to better their lot.

He noted that he is not the most qualified politician from the local government to govern the state but God destined him to lead the people of Bayelsa.

His words: “This is an event for the Kolokuma/Opokuma people to exude love, unity and peace. Let us not sacrifice our love on the altar of politics. Politics should not be an instrument to divide us.

“You are aware that I was one of the apostles of the move to produce a Kolokuma/Opokuma son as governor and for over 10 years I was in that movement. I never knew that one day God would say you are the person to lead.

“In the same vein, I enjoin other local government areas in the state to have a meeting place to talk about the development of their area. It should not always be what you can get as a person from government. This is the time for us to build the roads, build the bridges and go into agriculture, trading and business.

“What will bring food to the table is agriculture, doing business and having small scale industries. This government is determined to help us move away from relying on politicians and political appointees for assistance.

“The Ijaw man has never been beggarly. The true Ijaw man respects himself and works hard. Likewise our women, who also work to improve their standard of living.”

While acknowledging the role of Apostle Zilly-Aggrey in planting the seed of God in the people of KOLGA through the annual thanksgiving, the governor noted that the event was a fruitful ground.

He also recognised the role played by Senator Seriake Dickson, who against all odds stood his ground in line with the purpose of God to see the manifestation of the present administration.

He equally called on Bayelsans to recognise the supremacy of God in the affairs of men and turn to Him to be free from all forms of bondage.

In his sermon titled: “Yes, God Can,” Apostle Zilly-Aggrey stressed that God had always proved Himself to turn around situations that seemed impossible to man.

Citing the emergence of Governor Diri as an example, Zilly-Aggrey said it was a case of God turning things around when man had lost hope.

The cleric admonished the people of KOLGA not to cease praising God for what He had already done but to make thanksgiving a daily lifestyle.

Highpoint of the event was special prayers for the governor and his administration by a host of clerics led by Zilly-Aggrey. 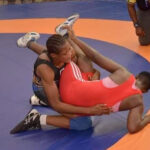