Bayelsa State Governor, Senator Douye Diri, has set up a special committee to look into the demands of the Association of Academic Staff Union of Universities (ASUU), Niger Delta University (NDU) chapter as well as that of the Higher Institutions Joint Action Committee  (HIJAC) in the state in order to address them.

Senator Diri, who inaugurated the committee on Friday in Government House, Yenagoa, when he met separately with both bodies, expressed his administration’s preparedness to ensure peaceful resolution of the welfare issues affecting staff of the state-owned higher institutions.

In a press release by his Chief Press Secretary, Mr Daniel Alabrah, the governor was quoted as mandating members of the committee to look into their demands and submit its report within two weeks.

The demands of NDU ASUU include payment of promotion arrears and salary differentials arising from step increment accumulated from October 2015 till date, unpaid study fellowship allowance and tax rebate of 50% for all workers.

Others are payment of salary arrears to workers employed in 2013, government’s subvention policy to cover payment of staff salaries, implementation of national minimum wage and construction of staff residential quarters.

As Visitor to the NDU, Senator Diri expressed government’s commitment to making the state-owned university a model for academic excellence.

His words: “The state government is interested  in resolving anything that will impede your welfare and performance. My administration is ready to work with you to ensure that NDU develops.

“I plead with you to be patient. My administration is not even one year old yet. We virtually lost year 2020 to many challenges and we were all struggling to stay alive because of the COVID-19 pandemic.

“We also have competing needs and so let us try to resolve these issues amicably because they are not beyond government’s intervention.”

Urging members of ASUU to exercise patience with his administration, he described NDU as a strategic tertiary institution that had contributed significantly to the manpower development needs of the state.

He also assured that the educational sector would continually enjoy a pride of place in his administration.

At the meeting with the Higher Institutions Joint Action Committee  (HIJAC), Governor Diri urged the body to see fiscal autonomy as the shortest route for higher institutions to become autonomous.

While commending the labour group for its friendly disposition, the governor said his administration’s desire is to have a peaceful and harmonious relationship with all groups, working together to develop the state.

Chairman of the NDU ASUU, Comrade Tonbra Kingdom, in his remarks, said the union’s members have been contending with issues bordering on their welfare.

He said the subvention policy of the government was not favourable to the institution as it had to source for funds to complement payment of salaries to workers and urged the governor to intervene.

In his own remarks, the State HIJAC chairman, Mr. Ebaritonbofa Tonwei, reeled out similar demands and expressed the belief that the necessary action would be taken to maintain industrial harmony in the state tertiary institutions.

Members of the committee are chairmen of the House of Assembly Committees on Education and Labour, Salo Adikumo and Mrs. Ebiowou Koku-Obiyai respectively and the Secretary to the State Government, Dr. Konbowei Benson.

Others are the Commissioner for Education, Gentle Emelah, his Finance and Labour and Employment counterparts, Maxwell Ebibai and Otokito Federal respectively as well as the Technical Adviser on Treasury, Accounts and Revenue, Mr Timipre Seipulou. 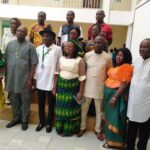 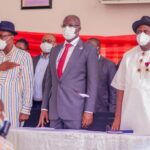