The Bayelsa State Ministry of Health in collaboration with the World Health Organization has marked the World No Tobacco Day, which takes place on May 31 every year.

The event themed, “Commit to Quit” was held on Monday 31 May 2021 at the Bayelsa Medical University, Imgbi road Yenagoa.

The Vice Chancellor, Bayelsa Medical University (BMU), Prof. Ebitimitula Etebu said the event was an opportunity to share and update knowledge on tobacco use and ensure the creation of a safe environment for all.

While welcoming participants, he said everyone is affected by tobacco whether they smoke or not which buttresses the importance of the event as it impacts on the health of all.

Dr. Etebu stated that he believes the event will keep attendees abreast on the issues surrounding tobacco use and how to prevent them.

He said the WHO is supporting countries to scale up programmes to help people quit tobacco use especially at the primary health care and community levels under the WHO Framework Convention on Tobacco Control.

Dr. Egbe said this includes programmes in school, universities, health and sports facilities among others, to diagnose tobacco dependence and help people quit.

Giving the First Lecture on “Tobacco: it’s Effects On Second Hand Smokers”, Dr. Preye Ogbe said, second hand smoke refers to the combination of main stream and side stream smoke released by smokers into the environment which is also known as Environmental Tobacco Smoke (ETS).

He noted that over 70% of children across the world are exposed to second hand smoke which leads to high mortality rates, therefore he called on everyone to protect children and pregnant women from such smoke.

He said over 50% of cancer causing chemicals can be transmitted to a non smoker which exposes them to lung disease, heart diseases, throat cancer, liver and kidney failure among others.

Barrister Igbomgbo Nelson in the second lecture on “Tobacco Control Policies in Nigeria” said policies of the Federal Government have been put in place to restrict smoking in public areas.

He stated that the Tobacco Control Act of 2015 ensures this, as well as the Nigeria Drug Law Enforcement Agency (NDLEA) who have arrested, convicted and taken a large number defaulters to prison.

He advised people to report anyone who flouts these restrictions to the NDLEA for proper investigation and prosecution, saying everyone must take personal responsibility to enforce the law.

The event continued with a question and answer segment anchored by Barr. Igbomgbo Nelson and Dr. Edmund Egbe.The highlight of the event was a playlet advocating for a tobacco free society by The Foremen. 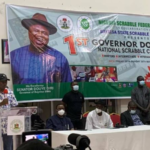 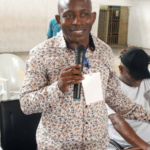