The complex is named after the late media icon and pioneer editor of the Daily Times, established in June 1925.

Ayu noted that Ikoli was not just the first editor of the Daily Times but a nationalist.

He stated that a part of him most Nigerians do not know was that he was once a journalist and also an Editorial Board member at the Daily Times.

Ayu commended the performance of the Bayelsa governor, saying the party was proud of his achievements in two years.

He said it takes a man of great commitment to do so much in such a short time when some others were still struggling to find their footing in governance.

He said despite the initial hiccups in his first year, Governor Diri stood against all odds and is breaking new grounds through the inauguration of several projects.

The party’s chair described Diri’s performance as the trademark of the PDP governors across the states as they were elected with the mandate to work for the people they govern.

He said: “I’m very proud of Governor Diri. It takes a man of singular commitment to do so much in a short time. Many of you who have governed states will know that sometimes it takes a governor about a year before he finds his feet.

“Governor Diri came and stood on the shoulders of giants and because the ground was so prepared, he hit the ground running.

“Today after only two years, we are able to come here to inaugurate several projects.

“Two days ago, the governor of Oyo State called that he was in Bayelsa to inaugurate project. This is how governors of the PDP work. They work for the people. They do not leave their states to stay in Abuja as some of those other parties who abandon their states and become chairman of their party.

“I want to thank all the PDP governors across the country for making the party proud. It is your work that is giving confidence to the Nigerian people that PDP is coming back after staying out of power for about six years. Nigerians now know that members of PDP are determined to serve this country.”

In his address, Governor Diri said because of the history surrounding the state media, the government decided to name the complex after Nigeria’s foremost journalist whose contribution to the profession and the media is acknowledged all over Nigeria.

Senator Diri recalled how some unfortunate incidents bedeviled the state radio station ranging from fire, windstorm and the ugly attack on the station and staffers on the eve of his swearing in by overzealous opposition party members.

The governor said it was the travails of the state-owned media practitioners that necessitated the building of the edifice by an indigenous contractor.

He noted that the complex was one of the humble efforts of his administration and the PDP, stating that he will continue to render service to the people.

He said: “We looked at the history surrounding this complex and from our state here, we had one of the early journalists who became Editor of the Daily Times, and whose contribution to journalism and the media is acknowledged all over Nigeria.

“We decided to name this complex in the name of this veteran journalist who hails from Bayelsa, precisely from Nembe.

“There were situations that necessitated the decision to put up this masterpiece. We had some natural disasters that affected almost all our media operations.

“Upon the pronouncements of the Supreme Court of the victory of the PDP, some overzealous persons came in here and destroyed everything they could lay their hands on.”

Senator Diri emphasised that his government had already approved funds for equipping of the media outfits in the new complex with state-of-the art facilities in no distant time.

He commended the indigenous contractor for proving critics wrong by delivering the job with so much class and on time.

Earlier in his welcome address, the Commissioner for Information, Orientation and Strategy, Mr. Ayibaina Duba, thanked Governor Diri for keeping to his words to alleviate the pains of all state media practitioners through the provision of the complex. 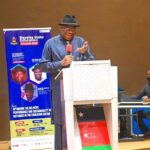 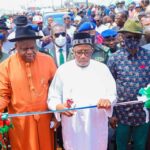