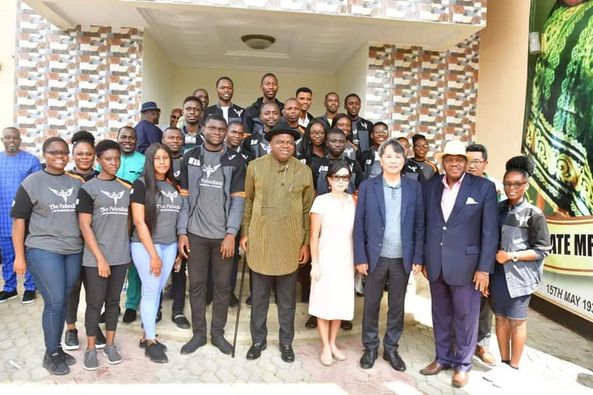 The Governor of Bayelsa State, Senator Douye Diri has directed the relevant ministries to initiate a process for the immediate commencement and completion of all pending pojects in the Niger Delta University Teaching Hospital, Okolobiri.

The Governor stated this when he received in audience, the final year Medical Students of the institution at his country home, Sampou, Kolokuma/Opokuma Local Government Area of Bayelsa State.

The Final Year Medical Students were in Sampou Town to express their appreciation to the people of Sampou for the hospitality shown them, during their compulsory Community Medicine Rural Posting Course, which they had in the community.

The Group 10 Medical Students, popularly known as “The PABODIANS” also presented awards to some deserving individuals from the community including the Governor.

Having been informed that the governor was in town, the Students decided to seize the opportunity to present to the governor the AWARD OF EXCELLENCE which they had long prepared for the Governor.

Speaking while receiving the award, the governor thanked the Pabodians for the honor, and ordered for the immediate commencement of all Projects in NDUTH, Okolobiri.

“This visitation is more or less an ambush. I was about to leave when the Honorable Commissioner informed me that you are around. I couldn’t resist because when it comes to Education, you get me.

“I have rejected some awards in the past, but for you to contribute from your meagre stipends to make this, I will accept it. I encourage you to be better at what you do.I want to thank you all, for honouring me with this award”, he stated.

The Governor assured them that the state government would urgently look into the infrastructure challenges being faced by the medical students at the teaching hospital and said he was pleased and proud of his Commissioner for Special Duties, Mr. Obosi Churchson, who returned to school to study Medicine and Surgery.

“This is a great example to our youth that you as a commissioner returned to school to take up another academic challenge. I am also fully aware of the challenges you are facing at NDUTH. I want to use this medium to tell the commissioner for Education in liaison with the Commissioner for Health for the immediate commencement of all projects in NDUTH”, Governor Diri, stated.The Medical Students were also privileged to have met with the visiting South Korean Ambassador to Nigeria, Kim Young-Chae, at Sampou. 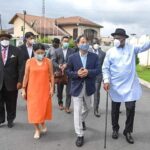 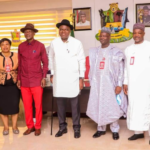