for allowing the will of the people to prevail through a free, fair, peaceful and credible conduct of last Saturday’s bye-elections for the Bayelsa West and Central senatorial districts.

Senator Diri, who gave the commendation on Monday at a press briefing in Government House, Yenagoa, also gave thumbs up to the security agencies for their effort at ensuring that the electoral process was unhindered.

The governor in a press release by his Chief Press Secretary, Mr. Daniel Alabrah, quoted him as urging members of the opposition parties, particularly the All Progressives Congress (APC), to accept the outcome of the poll adjudged to be free and transparent.

While appealing to the main opposition party members to join forces with the government of the day to build the state for the good of all, Senator Diri described the senatorial electoral victory of his predecessor, Chief Seriake Dickson, and former Peoples Democratic Party (PDP) state chairman, Mr Moses Cleopas, as an early Christmas gift, emphasising that power comes only from God.

His words: “It is highly refreshing to note that the electoral process in our state was largely peaceful and orderly. I wish to thank INEC, security agencies and all stakeholders for lending their goodwill and for respecting the will of the people.

“By this outcome, voters have made a strong and unequivocal statement that they want to see a continuation of the dynamic and issue-oriented representation that my deputy governor, Senator Lawrence Ewrudjakpo, and I championed at the National Assembly.

“We cannot thank you enough for your trust and confidence in the PDP. I wish to sincerely thank all Bayelsans irrespective of political persuasion for participating in a transparent and orderly electoral process. Indeed, I consider this an early Christmas present, not only because you overwhelmingly endorsed the two outstanding candidates of the PDP presented to you but more importantly because the vast majority conducted yourselves with decorum.”

Senator Diri expressed his administration’s determination to evolve a non-violent electioneering culture in the state, maintaining that the recent election marked a watershed where the electorate did not only vote for candidates that would effectively represent them at the red chambers but also voted for a system devoid of bloodletting and brigandage that characterised particularly the 2019 governorship election.

“We hope that INEC improves on conducting peaceful elections across the country and we look forward to the Commission achieving less violent and near zero electoral fraud.”

Reacting to questions shortly after the briefing, Senator Diri attributed the peaceful senatorial bye-elections to the handiwork of God as well his consensus building approach in choosing candidates.

On the issue of internally displaced persons arising from the conduct of the 2019 election, the governor announced that efforts have been ongoing by his administration to resettle such persons in Nembe local government area of the state, adding that soon they would be fully integrated with their kith and kin. 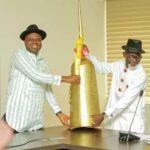 Next:
Celebrating Retirees of the Bayelsa State Ministry of Information, Orientation & Strategy