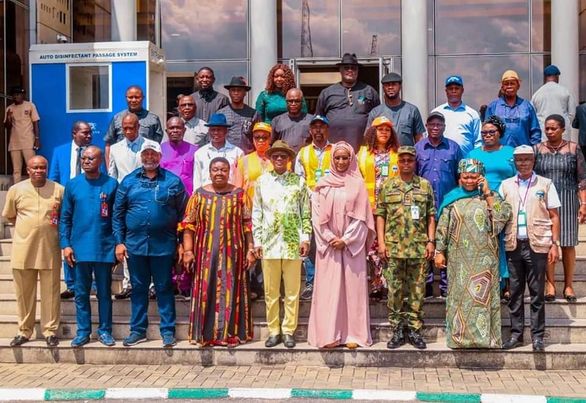 The Governor of Bayelsa State, Senator Douye Diri, on Tuesday received the Minister of Humanitarian Affairs, Disaster Management, and Social Development, Dr. Sadiya Umar Farouq, restating his call for effective support from the Federal Government and well meaning individuals and organizations to the state over the recent flood disaster.

Receiving the Minister and members of her entourage during a courtesy call in Government House, Yenagoa, Governor Diri remarked that the Minister’s visit to the state was long expected, especially when the flood was at its peak.

The Governor, who spoke through the Deputy Governor, Senator Lawrence Ewhrudjakpo, pointed out that initially the government and people of Bayelsa State were not pleased with some remarks credited to the minister about the flood disaster in the state, that Bayelsa was not among the 10 worst affected states in the country.

Governor Diri informed that the flood rose to over 4.5 metres above its normal level and caused unprecedented devastation, hence the news that Bayelsa was not among the worst-hit states was unsettling and worrisome to its people.

He also thanked President Muhammadu Buhari for including Bayelsa as a member of the National Flood Relief Committee, and expressed the belief that the state would get her fair share from the Federal Government’s post-flood relief measures.

His words: We are happy and elated that you have finally visited to comiserate with us. The flooding disaster is actually nobody’s fault but it is an issue of climate change. For record purposes our meteorological department in the Surveyor General office and Ministry of Environment monitored the flood and from records available it showed that the flood rose by 4.26 metres.

“And that is why, for the first time almost the entire state was submerged in water. The NEMA South South representative can attest to the level of damage caused by the flood this year.

“I also want to use this opportunity to thank the federal government for setting up a relief emergency committee and we are going to make suggestions that will ensure immediate relief for our farmers, fishermen and also cater for citizens’ health challenges arising from the flood.

“Honourable Minister, if you had visited us at the peak of the flood, you would have better appreciated what we as a government and people went through. Even now that the flood is receding, you will agree with me that it’s effect is beyond the handling of the state government. That is why we keep calling for support from the Federal Government and other well meaning individuals and organizations.”

Earlier in her remarks, the Minister of Humanitarian Affairs, Disaster Management, and Social Development, Dr Sadiya Umar Farouq, said she and her team were in the state to empathize with the government and people of Bayelsa State over the devastating 2022 flood, which impacted negatively on the state.

Dr. Farouq who commended the efforts of the Bayelsa State Government for providing support for the flood victims, disclosed that part of her visit to the state was also to rollout her ministry’s economic empowerment packages for beneficiaries from Bayelsa.

The Minister also disclosed that the National Home Grown School Feeding scheme which commenced since 2016 would be introduced in Bayelsa this year, and called on the state government to create an enabling environment for the scheme to succeed in the state. 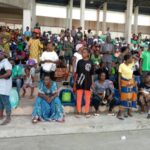 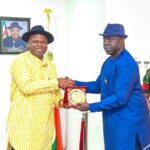